Beschreibung:
The Rival Networks is a standalone two-player version of The Networks. Much of the original's gameplay is preserved, but streamlined so that it plays in 30-45 minutes. You and your opponent each have a display of 3 Timeslots, and at the start of the game, they show your starting 3 (terrible) Shows. There is also a Goal Card showing for the current Season, with 3 Goals available to hit (like winning a particular Timeslot, or having more Stars on your Shows than your opponent).

On your turn, you will pick one new Show from a display of 3, and use it to replace one of your existing Shows, which moves to your Reruns. You'll score Ratings Points for the new Show, scoring higher ratings if you put the show in its correct timeslot.

Next, you select one Star and one Ad from their corresponding display. Stars and Ads are displayed as pairs, so when you take one, you must take its matching pair. These go into your Green Room.

Then, you may attach as many Stars as you want onto a single Show (usually the Show you got this turn, but not always), as long as the Star has an icon matching the Genre of the Show. Stars add to your Show's Ratings.

You'll track Ratings for each of the three Timeslots independently. There are various points on each Ratings track with Viewer icons (usually between 3-5 Ratings Points). Every time you pass one of these Viewer icons, you'll score a Viewer by placing a chip into your secret bank.

Ads are worth money depending on various situations - usually whether you're leading at a given Timeslot. You'll pay the Ads in order to buy Network Cards (which are now marked with costs). Network Cards are one-time use power cards, similar to the Network Cards in the original game.

If you ever get at least 3 Shows of the same Genre between your Lineup and your Reruns, you'll score a Genre Bonus. Genre Bonuses are different for each Genre, but usually get you Stars or Ratings Points.

The deck of Shows has one Genre of each Show per Season. Once these are all out, you'll see an "End of Season" card. A player may take this card on their turn to trigger the end of the Season when their turn is over. They won't get a Show, but they'll still get a full turn otherwise (taking a Star and an Ad, placing Stars on Shows, and buying Network Cards with Ads).

At the end of a Season, the player leading in more Timeslots scores 1 Viewer for each Timeslot they're leading in; the other player draws 1 random Star. Then you'll look at the current season's Goals. The winner of each Goal gets Viewers or Stars depending on the goal.

The game ends after 3 Seasons. The player with more cards in their Green Room scores 1 Viewer. Then, the player with the most Viewers wins. 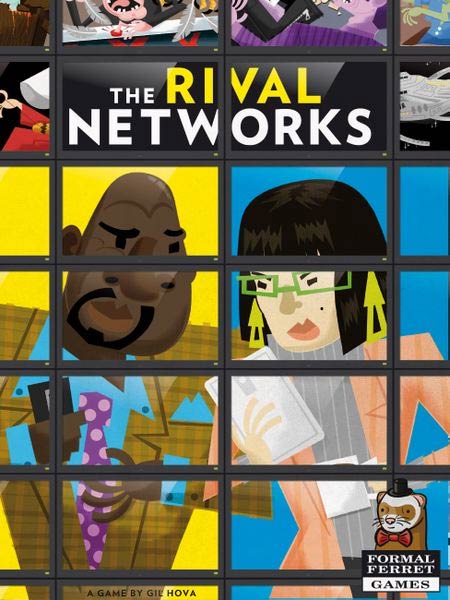